Some strategic moves that advance a product line are pure genius. At least that’s the way outsiders see them.

For example, take Apple’s iMac introduction of the M1 CPU. It’s genius at its best, right?

I’m sure loads of innovation went into the M1 chip and its union with macOS, the computer line’s ever-evolving operating system. But the reality is M1 was a strategic move that took over a decade to pull off. I don’t mean ten years of planning. It took over a decade of work, learning, and execution. 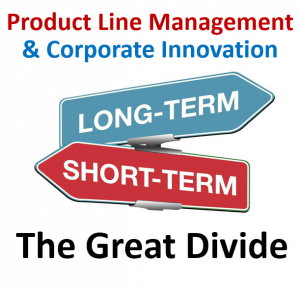 The planning happened before then and continues today. Does “pure genius” mean ten years of creating, learning, and executing, coupled with collaboration and planning? If so, then yes, the M1 was definitely “pure genius.”

Every product line manager should want to pull off strategic moves, as Apple did with the M1. Few, though, are in roles for long enough or have enough resources to do it. Major strategic moves transcend leadership and contributors. Strategic moves happen when business practices are bigger than individual managers. But don’t assume companies conjure up big moves in secret and spring them on the market on short notice. That’s not the way brilliant strategic moves happen.

Here’s an interesting fact. The significant action that led to the M1 chip occurred ten years before M1 rolled out. That was when Apple bought a small chip company for $250 Million but used none of its chips. The acquisition bolstered the i-brand company’s chip design capabilities. They needed this competency to be a “full-stack” player rather than rely on other companies like Intel.

Chip design competency wasn’t just about the M1 chip. Apple Silicon rolled out chips for their iPhones, accessories, and notepads before the large M1 CPU became a core of the Mac computer line. Strategists should also note the force Apple gains by combining the M1 with its macOS. The combination delivers far greater leverage than either can separately.

Many strategists shrug off Apple’s M1 strategic move as specific to the computer industry and of little value to their product lines. This is true to a degree. However, the bigger insight is how major strategic moves demand long-term thinking and execution. Yet there’s hardly a company that enables product line teams to carry out work that will take ten or fifteen years to bear fruit. Sure, teams can plan, envision, and share thoughts about a future state, but that doesn’t mean they can make the investments to make it a reality.

It wasn’t the product line team that made the M1 chip happen. Instead, it was a corporate move, knowing full well it would affect Apple’s products over the long term. The true genius is in connecting long-term investments to near-term activities. But in most large companies, the timeframes present more a divide, not a connection.

The long-term-near-term divide in large companies is substantial and intransigent. It’s also the most consequential split any company faces. Too often, though, leadership doesn’t seek to bridge the divide until it’s too late.

It’s common to see product line teams structure their efforts to maximize performance over two to three years, if not one. Yet corporate innovators reject this near-term timeframe in favor of a longer, five to ten-year horizon. The problem is the intersection of the two. It’s fraught with challenges and made worse by managers seeking to control their fortunes.

The dilemma is that major strategic moves demand teams to consider the future. Apple’s M1 chip is a case in point. Now consider Corporate Innovation’s most perplexing problem and opportunity. It turns out the biggest bang for the buck in Corporate Innovation comes from major contributions to existing product lines, not creating new lines. Yet, working with existing lines is not a preferred course among corporate innovators.

Evidence is ever-mounting that separating Corporate Innovation from current product lines is not wise. Still, many innovators who embrace a mental model that pits incremental against radical innovation argue that keeping the timeframes separate is a best practice. It may seem so in the here and now, but this thinking is counterproductive over the long run.

The same is true when Product Line Management shuns contributions from Corporate Innovation. You’ll find that doubling down and leaning out a stagnant product line will slow the line’s decline, but it also reinforces the certainty of its death.

The bottom line is:

However, the key question is how best to unite these disparate orientations?

The Chasm is Deep

The big divide organizations had to overcome in years past dealt with functions. Today, every manager and executive has heard the term “functional silos” as a way of painting a verbal picture of the problem. And every organization now employs cross-functional processes to defeat the challenge.

The divide between the near and long-term is different. Companies have yet to anchor a process that combines timeframes into a unified approach. Sure, top management deals with the issue using ad hoc meetings that set the stage for brave decisions. Yet, when a long-term vision isn’t captured in a company’s P/E ratio in large public companies, the union between timeframes is difficult to embrace. While we’ve heard stories and case studies of companies like Apple that achieved the timeframe union, the challenge is to set it up when day-to-day operations rule behaviors and decision-making.

Too Little, Too Late

Many experts believe the best course forward is to “transform” the organization into the future. It sounds great, but the approach must also recognize that sticky P/E ratio problem. The approach didn’t end well for GE a few years back or its CEO, Jeff Immelt. Analysts point to the company’s $5 billion push on lean startups across GE business units to secure a position within the Internet of things as the cause of shareholder value dropping more than $30 billion. That was one heck of a Corporate Innovation experiment.

Unfortunately, the correct course for GE should have started many years before the lean startup disaster even began. But that’s a hard message to sell when there’s no obvious problem. And that’s exactly the situation that causes the great timeframe divide. The job is to set up and enable brilliant strategic moves for existing product lines before the moves are needed. That’s pure genius.

But here’s the key insight about brilliant strategic moves. You don’t create them. Instead, you create a flow of knowledge and insights coupled with a product line’s context and uncertainty. Strategic moves emerge from this flow, but are not likely to be brilliant at their start. Brilliance takes time to shape and form. This is a monumental shift in thinking, especially when you must tie the complex uncertainty world to existing product lines and business practices.

The connection between the complex and turbulent Corporate Innovation flow and the orderly Product Line Management flow is crucial. It’s tricky, though. Each flow must progress separately but must coordinate with the other. The uniqueness of each flow makes applying the controlling guidelines or management approach of one flow to the other flow a guaranteed course toward failure.

But there is a way. It comes from viewing the product line as a system and advancing it by creating and shaping strategic moves. The job demands teams to use strategy guidelines to form and coordinate the moves and gain coherence and alignment across all actions in the near and long-term.

The company must place the roadmap into practice across both Product Line Management and Corporate Innovation to make this work. The approach demands a clear understanding of product lines and strategies. Plus, teams must understand the moves needed to be successful. Such moves include many actions and investments — everything from small changes to complete pivots.

Innovations and product line teams dance to different drummers in big companies. Yet, the separate rhythms reduce the chance a product line will undertake a major move ahead of the competition. The result is why we rarely see strategic moves like Apple’s M1 chip.

Ironically, a decline in a product line’s performance is the primary reason Corporate Innovators site for working separately. Their job, they believe, is to counteract the decline by finding new growth platforms independent of the line.

You’ll also see the performance decline as the main reason product line teams say they cannot work with Corporate Innovators. They lack capacity because everyone is battling the decline.

The biggest timeframe dilemma companies must confront falls to leadership. It’s because embedding a new practice demands organizational change. Yet change is easiest when there is significant pain and most difficult when there is no obvious pain. If product lines are experiencing pain from performance decline, change that enables long-term strategic moves may be too late. And when times are good for a product line, absent of pain, the motivation for change is minimal. Instead, the motivation must be created and driven by leadership.

A Call To Action

So, how does a company bridge the timeframe gap? It requires Product Line Management and Corporate Innovation to orchestrate change in how they operate. This change starts with each group learning “product lines as systems” and employing the construct in their day-to-day practices.

Product line teams use the approach to manage activities and decisions, while corporate innovators use it to tame uncertainty and form solutions.

Bridging the timeframe gap requires both sides to use the same roadmap. This connection seems obvious, but doing so is fraught with politics and opinions centered on “what’s best for me.” The goal is to hammer out a common view of a current state and then aid the emergence of new strategic moves to advance the line. Oversight and guidance are central to building a flexible and responsive roadmapping process.

Building the roadmap based on product line systems parts and forces is essential to forming the timeframe bridge. The systems view enables a common understanding of current and potential strategic moves, plus their linkage and coherence over both timeframes.

Please check our website if you wish to learn more. You’ll find blogs, white papers, and videos that share insights and help add to your thinking about product lines and corporate innovation. As always, don’t hesitate to get in touch with me directly with questions.