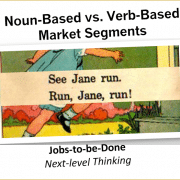 I bet you’ve never heard there’s a difference between Noun-Based and Verb-Based market segments. The notion of Verb-Based market segments sounds more like slick branding, not a valuable tool. But I hope to prove that wrong. In the past, whole industries have been formed using Noun-Based segmentation. When you buy a market research study, it’ll break down an industry by Noun-Based segments. But driving greater value from innovation and product development demands we complement the noun approach with verbs. OK. Now I promise not to get all “English major” on you. Stick with me, you may find this insightful. 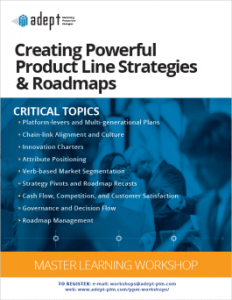 Think about market segments for a moment. Name a segment or two that get talked about in your company. Or think about a segment you’ve studied. Chances are these are Noun-Based. You’ll also see traditional segmentation schemes like geographies, demographics, and psychographics, those taught in business school, are all Noun-Based. Or you may hear segments tagged as product types or user titles. These are also Noun-Based.

There’s nothing wrong with traditional Noun-Based segmentation. It’s been a cornerstone to good marketing and selling for decades. You’ll see most sales forces divide their efforts by nouns. And yes, it’s also important for product developers to know if a Noun-Based segment is growing. They’ll also want to know if customers are satisfied and what competitors are doing within each segment. Plus, you don’t want to mess up your approach toward Noun-Based segments like the Chinese Market during a trade war, or the UK during its Brexit fiasco. The problem is that beyond these insights and understanding, developers gain little from dividing customers into groups defined by nouns. You must dig deeper if you want more.

Probing into Verb-Based segmentation is precisely the digging that developers need. It’s a way of describing how Jobs-to-be-Done thinking divides markets. And it’s based on a customer’s wish to carry out activities or make progress toward an outcome. Jobs-to-be-Done thinking builds on the notion that people don’t buy products. Instead, people hire products to do a job.

If your thinking is geared toward buying products, you’ll end up with traditional Noun-Based segments. And when you embrace the hiring products notion, you’ll land on a Verb-Based approach. The big deal for developers is that the Verb-Based actions tie directly to the outcomes that customers want. And these outcomes become targets for product attributes. In other words, Verb-Based segments are clusters of customers who want to hire products to produce common outcomes. And developers who know the Verb-Based groups also know the product attributes that will deliver those outcomes. Old fashioned Noun-Based segments don’t do that. They leave developers hanging.

The issue is that creating products differs from selling products. Still, many managers don’t consider how segmenting markets matters. To them, everything starts and ends with selling. You’ll see people work their tails off positioning products to sell more. And they organize whole companies to improve sales. To the marketing and salespeople, a company’s main mission is to sell.

Notice the problem when developers begin with Noun-Based segments. They must also conduct research to find opportunities. It starts by using logic. But that logic is also tied to hope and luck. It’s not based on knowing as a fact that an opportunity exists within the Noun-Based segment. Sure, you may find potential developments. But it’s unlikely those will deliver the greatest impact in the near and long-term. Too often, they are one-off hits that lack coordination with higher level goals.

A Verb-Based mindset shifts how companies develop products. And most notably, it changes how businesses advance their product lines. But companies must pursue these gains deliberately. The task is more than getting people to read a few books or attend training sessions. You need to dig in and make a meaningful investment. That starts by researching the jobs that customers want done and what it takes to deliver good outcomes. It also demands smart analytics with enough data to figure out the Verb-Based segments. You’ll see that each segment is a mathematically derived cluster of job outcomes.

The Jobs Worth Doing

Consider these four tasks if you wish to gain the most from Verb-Based segments. They are not obvious to everyone.

First, you must figure out how to lay out and measure customer jobs and the outcomes customers are seeking. Specifically, it’s the measure of progress toward getting jobs done better. But to get your mind around the task, consider that markets (all segments together) can have over one hundred desired outcomes needing to be measured. And the measures will capture the customer’s desire to do the job faster, more reliably, and more efficiently. That’s big data. The good news is it opens many opportunities. Plus, the data are enduring. That makes this Verb-Based data an asset, not an expense.

Next, you must calculate job outcome clusters to define each Verb-Based segment. The key is a technique called “multi-variate cluster analysis” on the large data set. Don’t get scared by the technique’s name. It’s used in empirical research all the time. There are nuances to the approach so don’t expect a plug and chug answer to pop out. Knowledgeable managers will need to spot the logic behind each cluster. They need to rationalize why the outcomes form the clusters. Usually, this is because a few dominant outcomes tie together. You can then tag the Verb-Based cluster with a name that captures these outcomes.

3. Putting the Data to Work

Having the Verb-Based market data is one thing, using it is another. Many companies slip up here. It’s because there are a couple of paths you can take. The choice is to use the Jobs outcome data to help improve an existing product or a development project underway. Or it’s using the data to start up a new project from scratch. Most choose to help a development project that’s underway or to recast an existing product. Unfortunately, that can cause conflict with old ways and old thinking. And that doesn’t create a good setting to introduce Jobs outcome data.

The better approach uses the data to start up one or more new projects. It’s translating outcome clusters into targets for potential products. And it’s laying out product features that match a Verb-Based segment. The key is doing this repeatedly. This demands companies build the practices and tools that pull value from the data.

Companies also gain notably by using Verb-Based segments to help form product line strategies. This is the game plan for multiple products, not just one development. And it’s also where Verb-Based thinking shines. The idea is to use the Verb-Based clusters to complement traditional Noun-based segments, not replace them. And when competitors stick only to Noun-Based thinking, your product line will develop a distinct advantage. The reason is simple. You’ll be basing your developments on what customers want, not who they are.

You’ll see product lines produce powerful results when teams use Verb-Based segments. Smart product line management will use Verb-Based segments to plan platform-levers, pivots, and other strategy moves. That’s because Verb-Based knowledge assures that opportunities exist and that projects aren’t betting on luck. You’ll also see it minimizes lost opportunities, because it shows where they are. You need not guess. Plus, as a real bonus to product line strategies, it can squash competitors, especially those who stay locked to traditional Noun-Based thinking.

Giving the Verb-Based title to Job-to-be-Done segments draws a contrast with traditional, old fashion Noun-Based segments. Credit must be given to the Job-to-be-Done experts that figured out its underpinning. But gaining value from the Verb-Based approach demands practitioners to step up to the task and make the needed investment. Don’t expect a free lunch here. It’s more like a self-sustaining farm that continually feeds you healthy meals.

To see Verb- and Noun-based segments in action, consider the product line roadmap in Figure 1 and 2, below. This happens to be a B2B case, and the product line provides building materials to the construction market. The market swim lane in the roadmap at the top of the diagram has two rows. One for Noun-based Segments, the other for Verb-Based Segments. 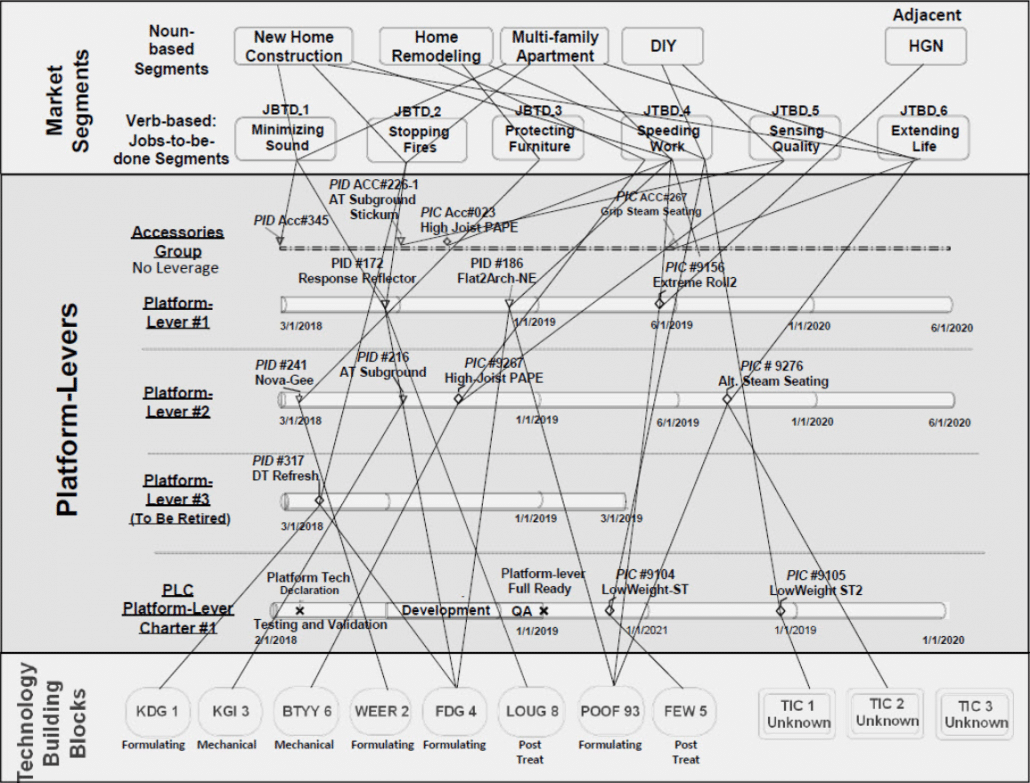 The Noun-Based row shows segments like residential home building and apartment construction. This is a traditional view.

The Verb-Based row is different. It reflects desired outcomes like resisting fire and blocking sound.  The title doesn’t mean the Job outcome stands on its own. Instead, the cluster analysis will show several outcomes tying together. The title merely reflects the main outcome, making it easier to diagram and discuss.

The key to the roadmap and the strategy is linking outcome clusters to products. The roadmap shows these products in one of three states. They are products in the market (PIMs). They’re products in development (PIDs). Or they’re targets for new products called product innovation charters (PICs).

Once you understand the PIC, you’ll be well-prepared to tackle Verb-Based influence on PIMs and PIDs. The PIC has much research to support its use and has been in practice for several decades. What’s new is matching the PIC to strategy and adding Verb-Based outcomes. These additions remove much uncertainty from PICs, making them vital to good product line practices. If you fulfill a PIC, you’ll likely have a successful product.

But please recognize that even the most excellent Verb-Based understanding won’t solve UX or design issues. It won’t tell you how to best bundle technologies into a product. And it won’t deliver the most effective platform-lever. You’ll still need hard work and genius to produce these results. But the advantage is that Verb-Based thinking will make these tasks easier. And it gives you a way to understand what genius is and isn’t. That goes a long way toward driving success.

My goal here has been to build your awareness of Verb-Based segments in contrast to traditional Noun-based segments. We can thank sharp Jobs-to-be-Done thinking for giving us this powerful view.  You don’t need to be an expert in the topic. But you do need to combine your product and product line knowledge with that from experts in Job-to-be-Done and Product Line Strategy. There’s much to be gained.

Check out my book, The Profound Impact of Product Line Strategy. Or consider my in-depth Masterclass. This 1-day class enables deep discussion specific to different product lines and organizations. You may also find our customized seminar, held on-site at your offices, a perfect fit to your needs and your product lines.

Want to join the discussion?
Feel free to contribute!

Jobs-to-be-Done – What Pioneers Get Wrong

NPD Portfolio Management and the Tilting Effect
Scroll to top